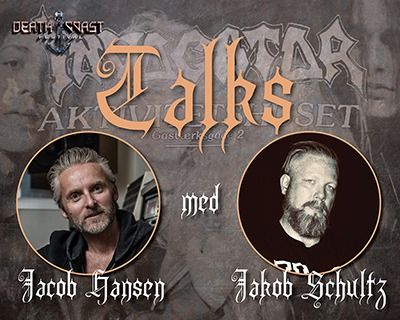 Get the whole story from those who wrote it back in the 80s and 90s. Ask all the questions you may have to Jacob Hansen and Jakob Schultz when we present DEATH COAST TALKS during the festival.

Jacob Hansen and Jakob Schultz were both part of Invocator’s line-up when the band released the deathrash classic “Excursion Demise”. They have toured with Dark Angel, Edge Of Sanity, Entombed, etc. and participated in the legendary Slow Death Tour in ´88.

They formed Maceration and released “A Serenade of Agony”, in which Dan Swanö recorded the vocals under an alias. They opened for mighty Dark Throne when they played in Esbjerg in 1990. A concert only a few of us experienced, and from which it is almost impossible to find photo documentation online.

Not least, it was Hansen and Schultz who arranged the concerts, which put Esbjerg on the map as Denmark’s metal capital in the 90s, and which is the direct source of inspiration for you to now experience the extreme metal again in Esbjerg for the Death Coast Festival.

Start Saturday at the Death Coast Festival in Tobakken’s cozy café with Hansen / Schultz TALKS before it hits off on the 2 stages!