Death Coast Festival will take place in Esbjerg, Denmark spanning 2 days on June 10th and 11th 2022. The Tobakken venue will host the 12-16 bands that over the course of 2 days will destroy Esbjerg!
The profile for the festival will be old school with inspiration taken from the cold and hostile environment around the harbour town of Esbjerg. Expect nothing but raw, old school death, black and doom metal the ancient way!
The festival’s co-creator and spokesman René Blavnsfeldt has 30-years experience in the Danish music business and the metal underground, where he met the festival’s other co-creators and masterminds Michael H. Andersen and Morten Nissen in 1991. The reason for creating Death Coast Festival in René’s words:

The profile for this festival will be with an oldschool approach, with inspiration in the raw and bleak harbour town of Esbjerg, so expect nothing but raw, oldschool death and black metal the ancient way!

“30 years ago Esbjerg was the hotbed for all things extreme metal with legendary bands such as Invocator, Maceration, Caustic, Iconoclasm, Chiro Therium, Sacrificial, Autumn Leaves and many more spearheading the embryonic stages of the extreme Danish Metal scene.

Many legendary bands such as Massacre, Morgoth, Darkthrone, Suffocation, Gorguts, Blasphemy, Incubus, Benediction, Bolt Thrower, Morbid Angel, Immortal etc. passed through Esbjerg on their European tours. Death Coast Festival aims to bring Esbjerg back on the extreme metal map and we can ensure you that this festival will not be a one-off but rather a festival, which every year will bring the legendary, the reformed and the best new oldschool talent to the stage! Already this first year you can expect a few surprises and get a chance to see bands which you thought you would never get to see again.

The logo for the festival will be done by Vibeke Johansson who did the legendary cover for Excursion Demise by Invocator and we plan to involve many more legends from the ancient Underground. Death Coast Festival is a festival driven by the love for the last 40 years of extreme metal and we will accept no compromise. For two days we will bring you only the finest oldschool metal at Denmark’s best indoor venue!”

See you at the Death Coast of Denmark! 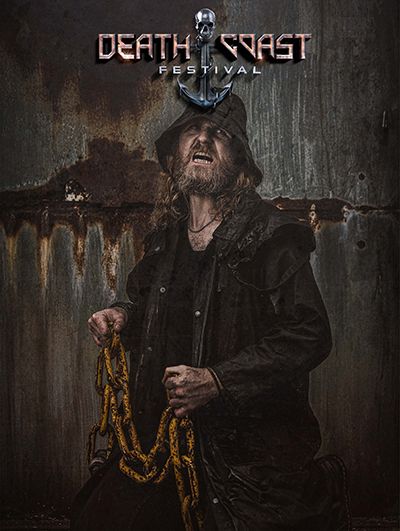